Black Lives Matter has focused on wealthy men who made many millions from slavery.

But there were slave owners in Bedfordshire too and their legacy is still with us today.

They weren’t all wealthy, some were local religious figures and some were women.

Thanks to a remarkable record, the Slavery Compensation Commission, we can find out who they were.

Like 46,000 others dotted across Britain and the Caribbean, they were paid compensation when slavery was finally abolished in 1833. Seventeen billion pounds in today’s money. Their slaves got nothing.

John Foster was a successful local farmer with land just north of Bedford.

His house at Brickhill Farm, stood on present day Brickhill Drive. He was a religious man, a Movarian minister, Lord of the Manor of Marston, and a magistrate. He was also a slave owner.

He jointly inherited two sugar plantations in Jamaica and the 572 slaves who toiled on them.

He met his third wife in Jamaica and brought her back to Bedford where he had grown up. In later life he returned to the island, leaving his family in Bedford. He died on his Bogue Estate in St Elizabeth aged 66 and is buried at St. James, Montego Bay.

We can see Foster’s influence in Bedford today. His farm stretched down the hill to Bedford Park. Part of it became a cemetery - Foster Hill Road Cemetery. 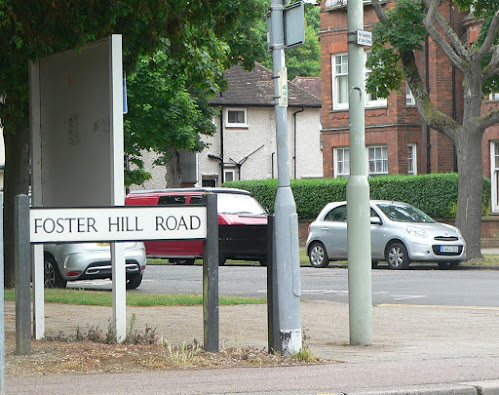 The track that ran down the hill along the edge of what became the cemetery and on into the town was known as Foster’s Hill. We know it today as Foster Hill Road.

Some may have been among the eight slaves Ezekiel owned who were recorded in the 1826 Slave Register.

Chloe, 47, and her two daughters: Charlotte, 24 & Sophy, 20. While Chloe is “African”, both her daughters are “Creole” – mixed race African and European – indicating their father was white.

A Reverend tries his luck

The Reverend Thomas Shuttleworth Grimshawe was Biddenham’s vicar from 1808 to 1850 and the author of several books, including The Christian's Faith and Practice.

His memorial plaque inside Biddenham Church tells us “He walked in faith, adorning his high and holy calling by a blameless life and a liberal mind.”

It does not mention that he also fancied his chances of getting a slice of slavery cash.

Grimshawe and three others had been trustees of the marriage of  George Sharpe, who was a Bedford slave owner. So the four of them applied to the slavery commission for a payout. They were turned down.

Mr Sharpe himself of Adelaide Square, Bedford, was more successful than the vicar of Biddenham.

Robert Hibbert was part of one of the biggest slave owning families in England. He was High Sheriff of Bedfordshire in 1815 and lived on the outskirts of Luton.

Hibbert Street in Luton is named after him. The charity he set up still operates 25 almhouses there which care for the elderly. There is also a pub, the Hibbert Arms.

His life was intimately bound up with slavery. He left England for Jamaica aged 21, and spent over a decade there before returning to join others in the family’s merchant business in London’s West India Docks.

Their business covered the shipping, insurance and distribution of sugar. They had their own ships and financed plantations. It was highly profitable.

Hibbert was also a strong believer in Unitarianism. In common with many people at that time, he saw nothing incompatible in having a religious belief and owning slaves.

In 1817 he paid for the Unitarian missionary Reverend Thomas Cooper to go to his Georgia Estate near Lucea in north west Jamaica, to Christianise his slaves.

But the two men fell out dramatically after Reverend Cooper made public what he saw.

Cooper wanted to set up regular Sunday worship but quickly found out that the running of a slave plantation made that impossible.

There was twenty-four hour working. Slaves toiling six days and three nights a week, almost without a break. It was dictated by the needs of sugar production.

As soon as the sugar cane is cut juice begins to deteriorate. Refining mills must be kept constantly supplied. Next the extracted syrup must be quickly refined so that sugar can be produced.

Sundays were the only days the slaves had to themselves to grow their own crops – their only source of food - and to visit the local market.

Perhaps it was Cooper’s frustration at not being able to carry out his missionary work or his horror at what he saw that led him to publish graphic details of how the slaves lived.

He wrote that almost all white men openly had sex with the female slaves. “Young women on the estate, instead of becoming the mothers of children, are, at an early age made the mere instruments of licentious gratification.”

It extended to white men who were visiting the plantation. When visitors went to bed, they asked for a girl to be brought to them “with almost as little ceremony as they would ask for a candle.”

Slave women did not marry and told Copper say they would be “fools” to try to be with only one man. The number of children on the planation was low due to the “brutalizing and demoralising” regime under which they live.

Miscarriages were very common and there was a “miserable neglect” of children. In one year there were only seven births among 400 slaves.

Cooper went further saying that George Thomas Oates, who ran the planation for Hibbert, had been living in “a state of illicit intercourse on the Georgia estate with a 16-year-old quadroon girl, who was pregnant with his child.”

Such behaviour was by no means unusual and is well documented as, sadly, is the brutal punishment Cooper witnessed.

Flogged for being late

Slaves on Hibbert’s estate were flogged for being late to work. They were forced to lie face down, held down by other slaves, stripped bare and whipped.

“Mr Cooper, on one occasion saw three or four old women come too late; they knew they were going to be whipped and as soon as they came threw themselves on the ground to receive the lashes.”

Grantley Berkeley as he was known lived at Harrold Hall from 1829. He was a violent man if crossed.

A novel he wrote was savagely reviewed in a London magazine. Berkeley travelled to London with his brother. When magazine’s publisher refused to reveal who the author was, he beat him up while his brother kept watch.

Two days later he went after the magazine’s editor fighting a duel with him. No one was hurt but the publisher took legal action and won damages.

He was slave owner thanks to his wife Caroline who had inherited them from her father.

The Paynes of Tempsford Hall were a wealthy family with a long involvement in slavery. When Sir Charles married, as part of the settlement, his wife got £2.5m at today’s prices.

The family’s wealth seems mainly to have come from slavery, as they had extensive plantations in St Kitts & Nevis for more than a century.

This is a snapshot of slave ownership at the end of slavery. In the two hundred years of British involvement in the slave trade its highly likely other people living in Bedfordshire would have been slave owners too.

The huge sum paid out to slave owners was the largest state-sponsored pay-out in British history before the banking crisis in 2008.

Without it, it’s arguable whether slavery in Britain would have ended when it did. It also absolved slave owners of guilt.

And abolition did not really end slavery. Slaves had to work up to 6 years “apprenticeship” until they were finally freed.

Compensation acknowledged that slavery had been sanctioned by the state, and was legal. Therefore taxpayers bore the cost – only finally paying off the debt in 2015.

Which means that through their taxes, the British descendants of slaves were paying for the cash paid to slave owners.